hello is currently being developed. It is not yet available for general use, but advanced users can try out continuous builds of pre-alpha ISO images that can be booted from DVD or USB storage media.

In the future, there may also be builds for other processor architectures. We would like to bring down the RAM requirement considerably.

The helloSystem 0.7.0 ISO image is available for download here.

Experimental and pre-release images are available for download here.

Experimental images get built automatically whenever source code is committed. Not every build is tested. Builds marked as “Pre-Release” are strictly for developers, may be broken and may not even boot.

The ISO file needs to be written to a device, e.g., to a USB stick, in order to a computer being able to start from it. This will overwrite and destroy all data on that device.

helloSystem comes with a Create Live Media utility that allows to write ISO files to a device easily.

If you are not running helloSystem yet or would like to use the command line, the following command should work on all BSD flavors:

On GNU-style systems (e.g., most Linux distributions), status=progress does not work and can be left away.

Ventoy is a tool that lets you boot the operating systems of multiple ISO files that are residing on the same disk, without the need to write the ISO to a physical device. Starting with version 1.0.62, Ventoy can boot helloSystem 0.7.0 and later.

If you are not running helloSystem yet, then please refer to the Ventoy documentation on how to create a bootable Ventoy disk (that you put your ISOs on) using Windows or Linux. 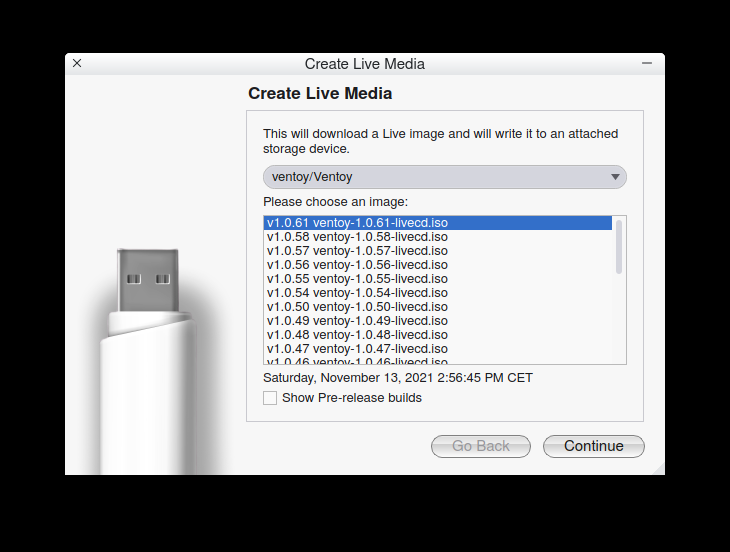 hello is known to boot to a graphical desktop on the following machines. Auxiliary functionality such as wireless networking, sound over HDMI, sleep, graphics acceleration, etc. has not yet been tested systematically.

helloSystem developers currently have access to the following hardware:

Please contact us if you would like to sponsor the project with a hardware donation. We are especially looking for Apple and Lenovo devices from the previous generations that should be available second-hand inexpensively.

To see Hardware Probes of systems running helloSystem, please see the helloSystem Hardware Database provided by bsd-hardware.info. It is reasonable to assume that every system listed there can at least successfully boot helloSystem. Auxiliary functionality such as wireless networking, sound over HDMI, sleep, graphics acceleration, etc. may or may not be working.

We recommend running helloSystem on real hardware (“bare metal”) if possible. This should give you the best possible performance and hardware support.

Users have reported success in running helloSystem in the following virtualization environments:

Please report back about the results on your virtualization environment.

Create an 8 GiB (or larger) hello.img image file on which you can install the system:

When QEMU starts, press esc and select 2 to boot the ISO.

Then restart QEMU, you now remove the last two options from the above command.

To boot/install hello in UEFI mode, first install OVMF Open Virtual Machine Firmware on your host side. The package name for Fedora 32 is edk2-ovmf

Then add these two qemu-system-x86_64 options: